It’s that time of year again…it’s Fete Day!  This Saturday, June 6th, the residents of Elfreth’s Alley will kindly open their homes for visitors to experience what life looks like inside the dwellings on one of the nation’s oldest residential streets.  This is only one of two times the houses are open to the public (the other is at the winter holiday Deck the Alley event), so be sure to go by and check it out!  The event will also include a book signing, colonial crafts, and demonstrations.  The event runs from 1-5pm on Saturday June 6th. Tickets are $25 and available for purchase online.

Kevin Donaghy, a PhD candidate at Temple University, is seeking volunteers to help with laboratory and field work in Brandywine, PA.  This is a great opportunity to work at an exciting Revolutionary War archaeological site!  Kevin is hosting a meeting about volunteering tomorrow, March 27th, at Temple University at 10am.  Even if you are not able to attend the meeting, you can directly email Kevin at kevinmd@temple.edu for more information.  The flier below also provides additional details. 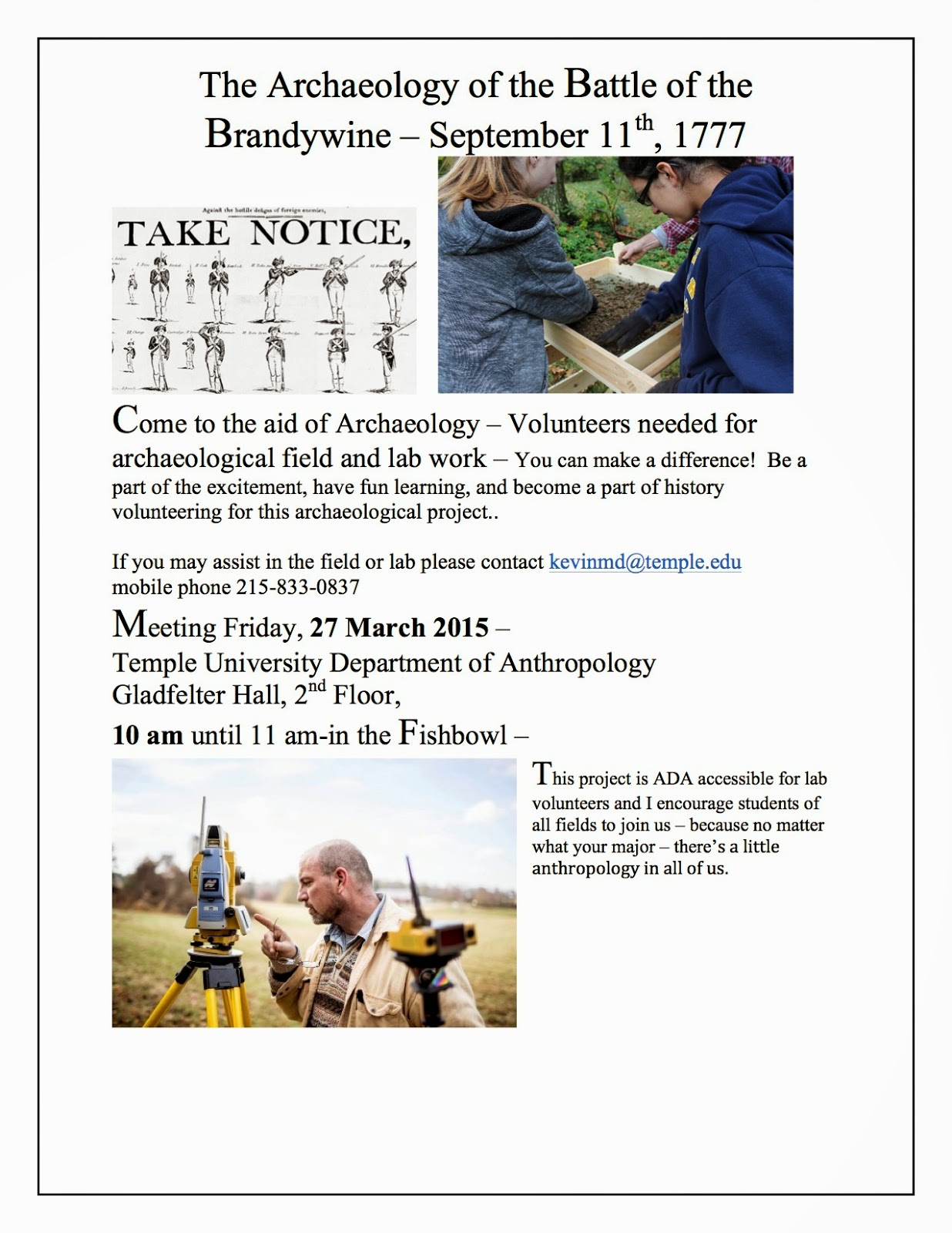 This week is the annual Society for Historical Archaeology (SHA) conference.  It is a wonderful and impressive gathering that brings historical archaeologists together from around the world.  This year the conference is being held in Seattle, Washington.  The week is full of symposiums, panels, workshops, and presentations about important topics in archaeology.  One topic that is very visible in this year’s programming is public archaeology.  A recent SHA blog post highlighted the events at the conference related to public archaeology.

Coincidentally, I will be presenting a paper about the public archaeology program at Elfreth’s Alley at the conference on Saturday, January 10th.  The title of my paper is Rediscovering Elfreth’s Alley’s 19th-century History through Public Archaeology.  Here is the abstract for the paper:


During the 19th century, Elfreth’s Alley in Old City Philadelphia was the bustling home of a community of immigrants from across Europe.  Today, however, the residential street is remembered and lauded primarily for its early colonial roots.  The Alley, which was formed circa 1702 and contains 32 brick row houses, was designated a National Historic Landmark District in 1960 and was later listed on the National Register of Historic Places as a notable representation of surviving, early American architecture.  While the Alley is popularly referred to as the oldest continuously-occupied residential street in the United States, studying and discussing the later, post-colonial periods of occupation on the Alley is often problematic against the backdrop of the preserved, 18th-century streetscape.  This paper examines how creating a public archaeology program at Elfreth’s Alley has helped bridge the metaphorical and pedagogical gap of examining 19th-century life in Philadelphia at a colonially-centered, historic site.

The conference promises to be a great, and I look forward to seeing my colleagues in Seattle!  For more information about the conference check out SHA’s website, blog, twitter, and facebook page.
Posted by Deirdre at 9:51 AM 0 comments

It’s that time of year again: time for Deck the Alley!  On Saturday, December 6th from 3-7pm, 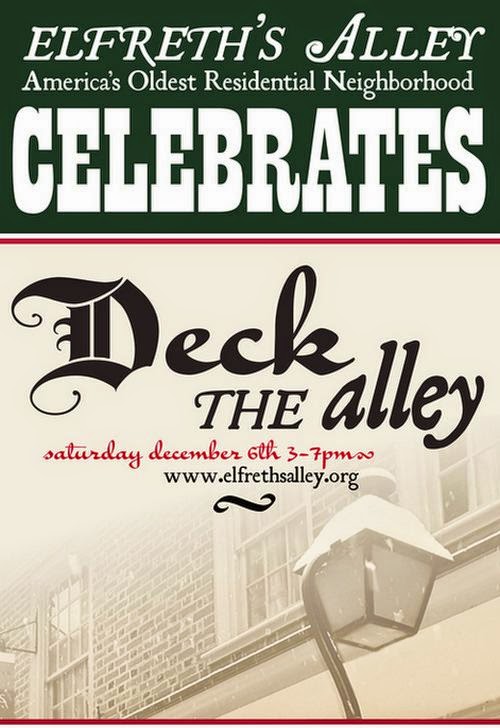 visitors are invited to tour the first floors of the homes of participating residents.  Every year the residents of Elfreth’s Alley generously open up their private homes for this holiday event.  This is your chance to get a peak inside the beautiful, historic houses along the Alley!  The event also includes other fun and festive activities including holiday carolers, carriage rides, book signings, refreshments, and more.  Further details about the event are available on the Elfreth’s Alley Website. Tickets are available for purchase in advance online through Ticket Leap or at the at the concierge desk at the Independence Visitor Center. (Ticket Leap charges a small surcharge for purchasing online, but there is no surcharge if you buy tickets at the Visitor Center.)


UPDATE:
Despite soggy conditions and quite a bit of rain, Deck the Alley was a great success! The event boasted unprecedented presale tickets and crowds of visitors got to see the interiors of several homes on the Alley. Everyone enjoyed themselves and indulged in seasonal refreshments while listening to carolers. I set up a small display of archaeology artifacts in the Museum’s courtyard highlighting the evolution of the properties at 124 and 126 Elfreth’s Alley. It was a great event, and I enjoyed talking to visitors about the archaeology! 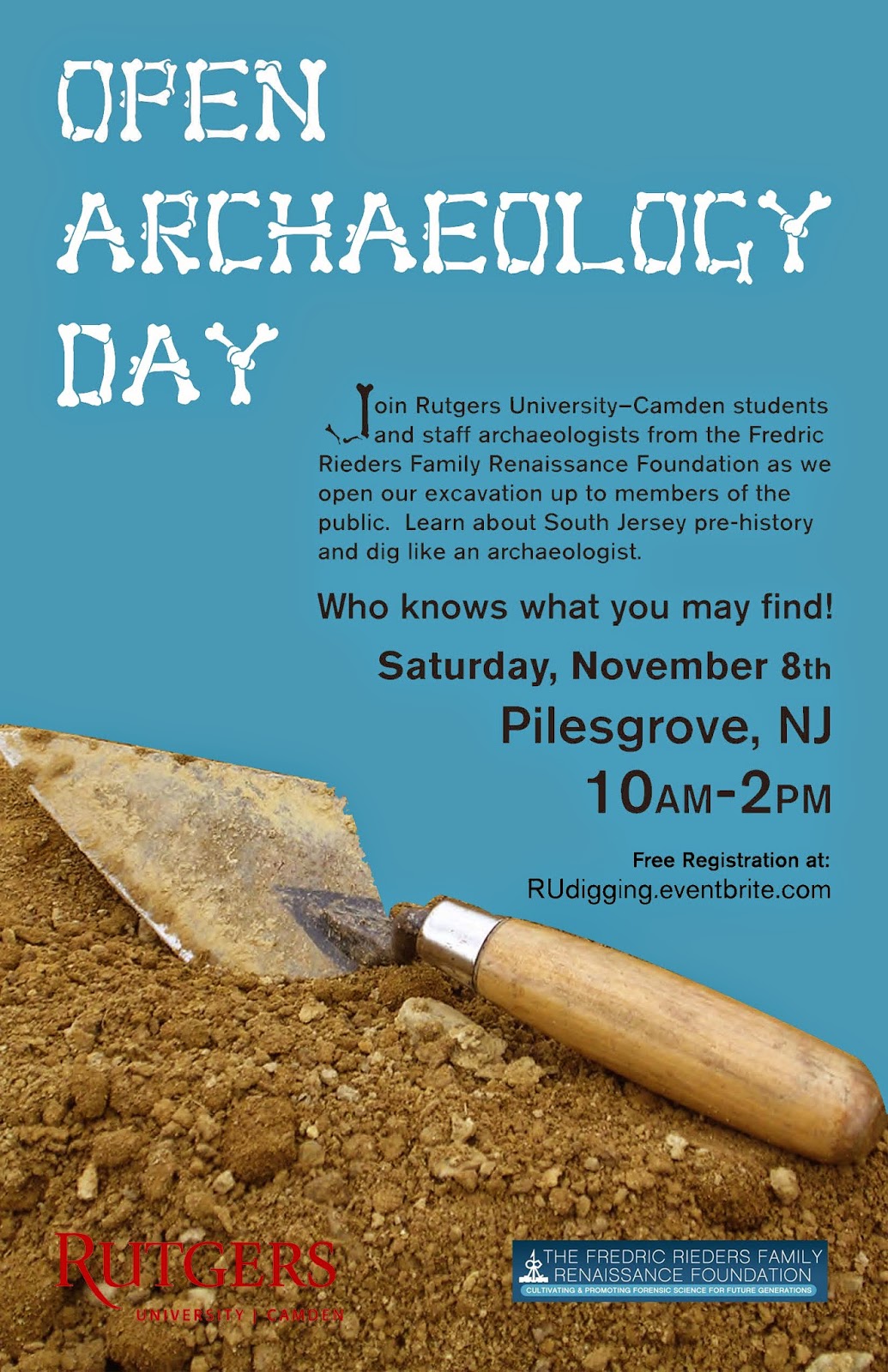 Rutgers University-Camden along with The Fredric Rieders Family Renaissance Foundation are hosting an open archaeology day in Pilesgove, NJ from 10 AM-2 PM on Saturday, November 8th.  Registration for this event is free and no prior archaeology experience is needed.
Posted by Deirdre at 4:40 PM 0 comments

Tomorrow, Wednesday September 24th, from 9-10:30am I will be on Morning Feed with Ed Feldman discussing Elfreth's Alley Archaeology.  Morning Feed is a talk radio program run by G-Town Radio, a community internet radio station based out of the Germantown section of Philadelphia.  More information about G-Town Radio is available on their website and Facebook page.  Tune in online here to check out the program tomorrow!  You can also listen to G-Town radio on the free iPhone app.  Just search “G-Town Radio” in the iTunes store to download the app. 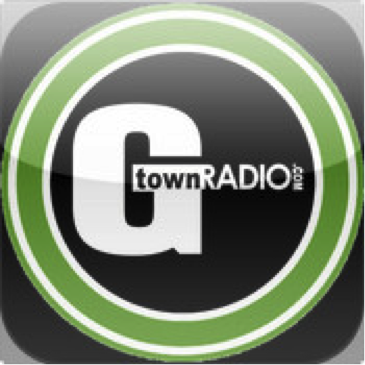 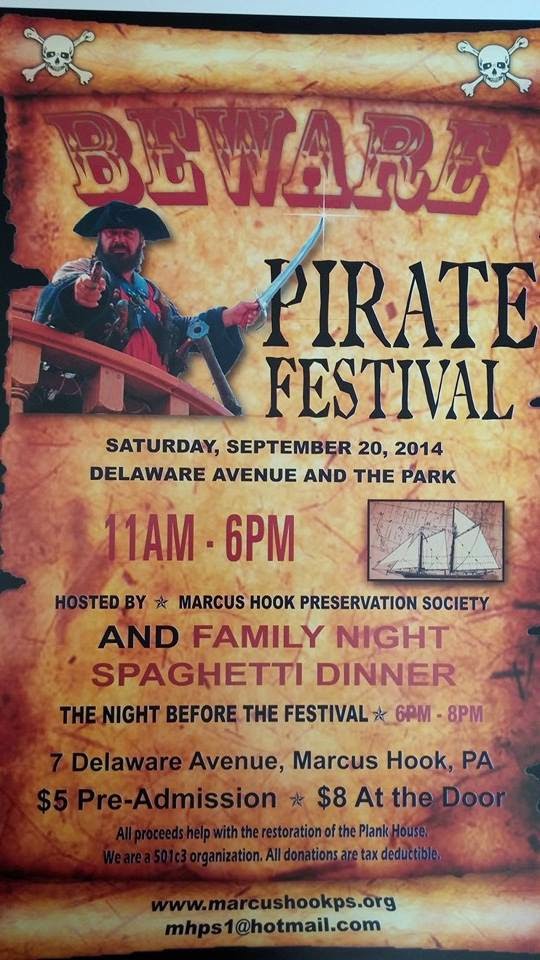 This Saturday, September 20th, is the 6th annual Marcus Hook Pirate Festival.   Hosted by the Marcus Hook Preservation Society, the event boasts a full pirate encampment, live pirate music, a beer garden, food, and games.  Of course there will be some archaeology too!  Since 2005, archaeologists have conducted research at the circa 1730s Marcus Hook Plank House.  A brief history of the house is available here.  During the festival on Saturday, archaeologists (including myself) will be at the Plank House from 11am to 5pm to clean up the site, continue excavation, and greet visitors as they tour the house.  The festival itself will be located in a municipal park right on the Delaware River and the Plank House is just a short walk down Market Street.  Tours of the Plank House will be available for a $1 donation.  All funds raised by event go towards restoring the Plank Log House.

The Philadelphia Archaeological Forum is gearing up to host its annual Pennsylvania archaeology month event on Saturday, October 4th.  The event will again be held at the National Constitution Center and will include several presentations by area archaeologists detailing the recent discoveries in the region.  Check out the preliminary program here.  As always, the event is free and open to the public! 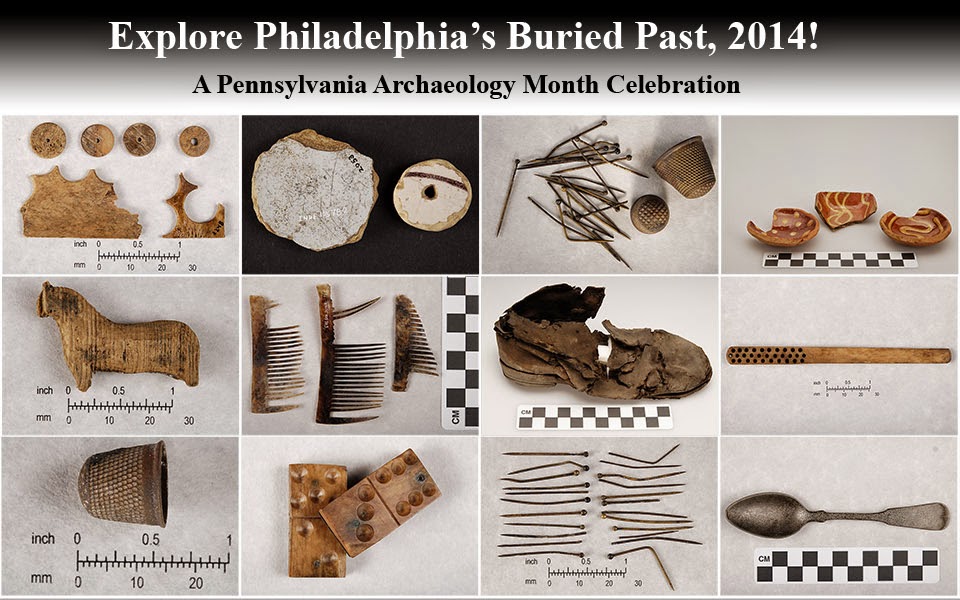 About Archaeology on the Alley

This site features details about archaeological investigations conducted at Elfreth's Alley in Old City Philadelphia during the summers of 2012 and 2013. Excavation was conducted behind the Elfreth's Alley Museum and Gift shop at 124 and 126 Elfreth's Alley. No further excavations are currently planned along the Alley.